Le Guislain is a little village of around 120 inhabitants in the Manche region of Lower Normandy. Ideally situated for exploring Lower Normandy, the gites are to be found in le coeur de la ville (surprisingly not at the heart of the village, which is about 2 kilometers further up the road!) just down the road from the pretty 15th century church, the Eglise St-Pierre, and the 17th century manor, which is still a working farm. Jean-Claude has a small orchard there and makes a rather lovely cider, which he supplies for the village functions. Just behind the church, our neighbours, Christophe and Virginie, have begun breeding sheep and goats. The goats can be hired out as eco-lawnmowers, and Christophe will be making and selling goat and sheep milk products.

At the end of the summer, the farmer grazes a handful of cows in the field that surrounds the property; the rest of the year he leaves the grass to grow and collects it two or three times.

A five minute drive from Le Guislain is the village of Hambye. Here you will find a range of shops selling all your basic needs: a bakery for warm French bread and croissants in the morning; a butcher’s; a small supermarket with self-service petrol pumps; two hairdressers, one of which I can particularly recommend; and two bars. There is also a doctor who speaks good English, and a pharmacy where a number of the staff have some English. Hambye holds two small weekly street markets on a Tuesday and a Friday in the new covered market area. Surprisingly, Hambye boasts a very popular patchwork shop called Hambyance. The English owner is very knowledgeable about all things connected with needlework and is always happy to stop and chat.

Nearby is the restaurant at the Auberge de l’Abbaye, which has a wonderful ambiance. The varied menu provides a perfect choice for a special meal.

The neighbouring romantic ruins of the Benedictine Hambye Abbey set on the banks of the River Sienne is also a fascinating place to explore, with some beautiful walks roundabout 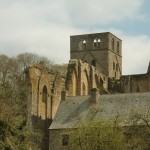 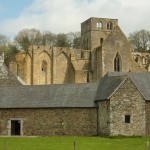 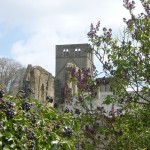 Hambye Abbey from the Normandy Tourist Board (in English)

10 minutes away is the small town of Percy. Here you will find a larger range of shops and a good sized supermarket. We have found that the petrol at the Intermarche is the cheapest locally! Percy boasts two restaurants;  Restaurant de la Gare and Les Gourmets, which is a pizzeria, and has three bakeries, so you are spoiled for choice when it comes to your morning croissants. The bar, le centre, is very popular with locals and has a pleasant outside decked area, perfect for people watching. The owner, Denis, is quite charming. There is also a weekly market on a Saturday morning.